The Bedford Eye Care Centre and AMD Alliance International want you to know that millions of people are at risk of vision loss from macular degeneration. Click on the link below to test your vision and pass this email on to family and friends to make them aware of the need for early detection through regular eye exams.
Click on this link to begin.
www.testyourvisionforamd.com/opto.php 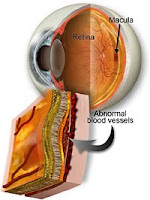 "Wet" macular degeneration occurs with formation of abnormal blood vessels and leakage in the back of the eye (retina), affecting the macula where fine focusing occurs.

Scientists in the U.S. have cured colour-blindness in monkeys, with an eye to one day doing the same for people.
The researchers at the University of Washington and the University of Florida used gene therapy to restore the colour sensitivity of two squirrel monkeys, and say the technique could one day treat other vision disorders involving the eye's cone cells.
"We've added red sensitivity to cone cells in animals that are born with a condition that is exactly like human colour-blindness," William W. Hauswirth, a professor of ophthalmic molecular genetics at the UF College of Medicine, said in a statement.
But even if you can cure monkeys of colour-blindness, how would you know?
The answer begins 10 years ago when Jay and Maureen Neitz — both ophthalmology professors at the University of Washington, and authors on the study — began training two squirrel monkeys named Dalton and Sam.
The couple also worked with the makers of the Cambridge Colour Test, a standard colour-blindness test using patterns of coloured dots, to adapt the test to non-human subjects. The researchers devised a computer touch screen that the monkeys could use to trace the patterns on the screen. When they correctly identified the pattern, the monkeys were rewarded with grape juice.
'It was if they woke up and saw these new colours … colours that had been invisible to them.'—Jay Neitz, study co-author
Hauswirth and colleagues at the University of Florida developed the gene therapy technique used in the experiment. The scientists wanted to produce a protein involved in red-green light sensitivity, called long-wavelength opsin, in the monkeys.
The genes that code for opsin were introduced into the monkeys using a harmless virus that incorporates its DNA into the host cell.
Used human DNA in experiment
"We used human DNA, so we won't have to switch to human genes as we move toward clinical treatments," said Hauswirth.
In the study, published this week in the journal Nature, the squirrel monkeys began to show signs of colour vision about five weeks after the gene treatment.
CBC Radio's Quirks and Quarks will have an interview with Jay Neitz, Sat., Sept. 19.
"It was if they woke up and saw these new colours. The treated animals unquestionably responded to colours that had been invisible to them," said Jay Neitz.
It took more than a year and a half for the researchers to test the monkeys' ability to see 16 different hues.
"If we could find a way to do this with complete safety in human eyes, as we did with monkeys, I think there would be a lot of people who would want it. Beyond that, we hope this technology will be useful in correcting lots of different vision disorders," Neitz said.
Genetic disorders of the cone cells in the eyes include achromatopsia, which causes poor central vision, as well as complete colour-blindness. The researchers said the same treatment could potentially cure this disease, as well as vision problems associated with aging and diabetes. 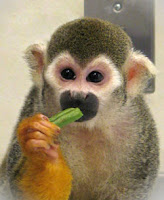 Dalton the squirrel monkey enjoys a green bean after treatment for colour-blindness. Before treatment, the bean would have appeared grey to the monkey. (Neitz Laboratory)

Posted by Dr. Toby Mandelman, Optometrist at 1:44 PM No comments:

A Child’s Eyes Should Be A Parent’s Concern

Here are a few facts a parent should know.

Here are some definitions of some common terms related to the eyes:
• Nearsightedness… Can see near but has difficulty seeing far away.
• Farsightedness… The eyes work harder than normal to see far away and work. even harder to see close up. High degrees of farsightedness need to be treated in children.
• Astigmatism… A distorted image created by a misshapen cornea.
• Glaucoma…related to elevated pressure inside the eye.
• Lazy Eye or Amblyopia… reduced vision from lack of use. Early detection (before age 5 is mandatory) and treatment is necessary to ensure best visual results.

So parents, please be concerned about your child’s eyes and have their eyes examined at the earliest age possible. You will be assuring that they have all the visual tools for a proper education and enjoyment of life’s experiences. Isn’t now a good time?

Posted by Dr. Toby Mandelman, Optometrist at 12:45 PM No comments: