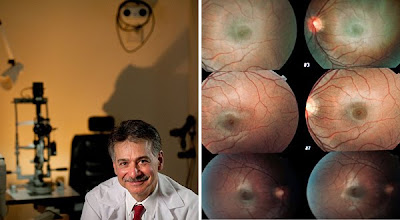 So far, the reports have been scattered and anecdotal. But eye doctors around the world are warning that recent cases of teenagers who suffered eye damage while playing with high-powered green laser pointers are likely to be just the first of many.

“I am certain that this is the beginning of a trend,” said Dr. Martin Schmid, a Swiss ophthalmologist who reported one such case last September in The New England Journal of Medicine.

The pointers, which have also been implicated in a ninefold increase over five years in reports of lasers’ being aimed at airplanes, are easier than ever to order online, doctors say — even though they are 10 to 20 times as powerful as the legal limit set by the Food and Drug Administration.

At the American Academy of Ophthalmology, a spokeswoman said the group was unaware of any increase in eye injuries caused by lasers. But doctors interviewed for this article said they were shocked by the easy availability of high-powered lasers.

Not long ago a high school student went to see Dr. Robert G. Josephberg, a retina specialist at Westchester Medical Center in Valhalla, N.Y., complaining of a blind spot in his left eye. The boy, who did not want to be identified, said the injury occurred when a friend waved a green laser pointer in front of his face.(Whether it will heal completely is uncertain.)

Dr. Josephberg said that at first he doubted the story. “I didn’t believe that a green laser was out there that could cause the damage,” he said.

But it turned out the laser put out 50 milliwatts of power, 10 times the F.D.A. limit. And as he investigated his patient’s case, Dr. Josephberg went online and bought a 100-milliwatt pointer for $28. He could hardly believe how easy it was.

“I kept waiting for the error message telling me I could not complete the purchase,” he said.

Like household lights, lasers are measured in watts, but the similarity ends there. A 100-watt incandescent bulb produces about five watts of visible light; the five-milliwatt laser is only one-thousandth as powerful. But because the light from a bulb is diffuse and a laser beam is concentrated, the effect of five milliwatts on the eye is 10,000 times as intense, according to Samuel M. Goldwasser, a laser expert and author of the online guide Sam’s Laser FAQ.

Dr. Jerald A. Bovino of the American Retina Foundation says the way the eye focuses can also intensify the laser.

“It is going to the fovea, the center of the retina,” he said. The darker pigment in the fovea absorbs the light as heat, quickly raising the temperature of the retina the same way a black car seat gets hot as it absorbs the sun.

Dr. Kimia Ziahosseini of the St. Paul’s Eye Unit at Royal Liverpool University Hospital in England says the dangers are so acute that even the F.D.A.’s five-milliwatt limit is too high.

“Laser pointers available for sale to general public should be less than one milliwatt,” she said. “Anything more than this puts people at risk by the criminally minded or those who are unaware of the risks.”

In a consumer update in December, the F.D.A. said it was aware that illegal laser pointers were being sold and warned that “a higher-powered laser gives you less time to look away before injury can occur, and as power increases, eye damage may happen in a microsecond.”

Daniel Hewett, a health promotion officer at the agency, said by e-mail, “There are many noncompliant products available for purchase from retailers, importers and, of course, via the Internet.” He noted that the agency had seized products from Wicked Lasers, an online store based in Hong Kong.

Steve Liu, chief executive of Wicked Lasers, said in an interview that its products did not violate the F.D.A. restrictions because those over the five-milliwatt limit were not called pointers.