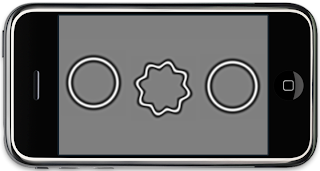 DALLAS, August 2011 — An upcoming iPhone/iPod Touch app called myVisionTrack will give macular degeneration and diabetic retinopathy patients the ability to monitor changes in their vision over time. This in turn can help their eye doctor adjust treatment as needed.

The 90-second test displays three circles, one of which is different from the others. You would cover one eye, then touch the circle that looks different. The differentiation becomes more subtle as the test progresses, and your scores are formulated and stored in the device. Then you test the other eye.

If your scores indicate that your vision has changed significantly, then you are instructed to visit your eye doctor.

Usually people with degenerative eye disease use an Amsler grid which looks like graph paper with a dot in the middle. When focusing on the dot, they may see distortions or blurriness in the lines of the grid, and recording these can help track their vision changes. But the developers of myVisionTrack say their device is twice as sensitive as Amsler grids in detecting subtle vision changes.

Prototypes are still in testing now, and the app is expected to be available sometime in 2012.

Posted by Dr. Toby Mandelman, Optometrist at 6:22 AM